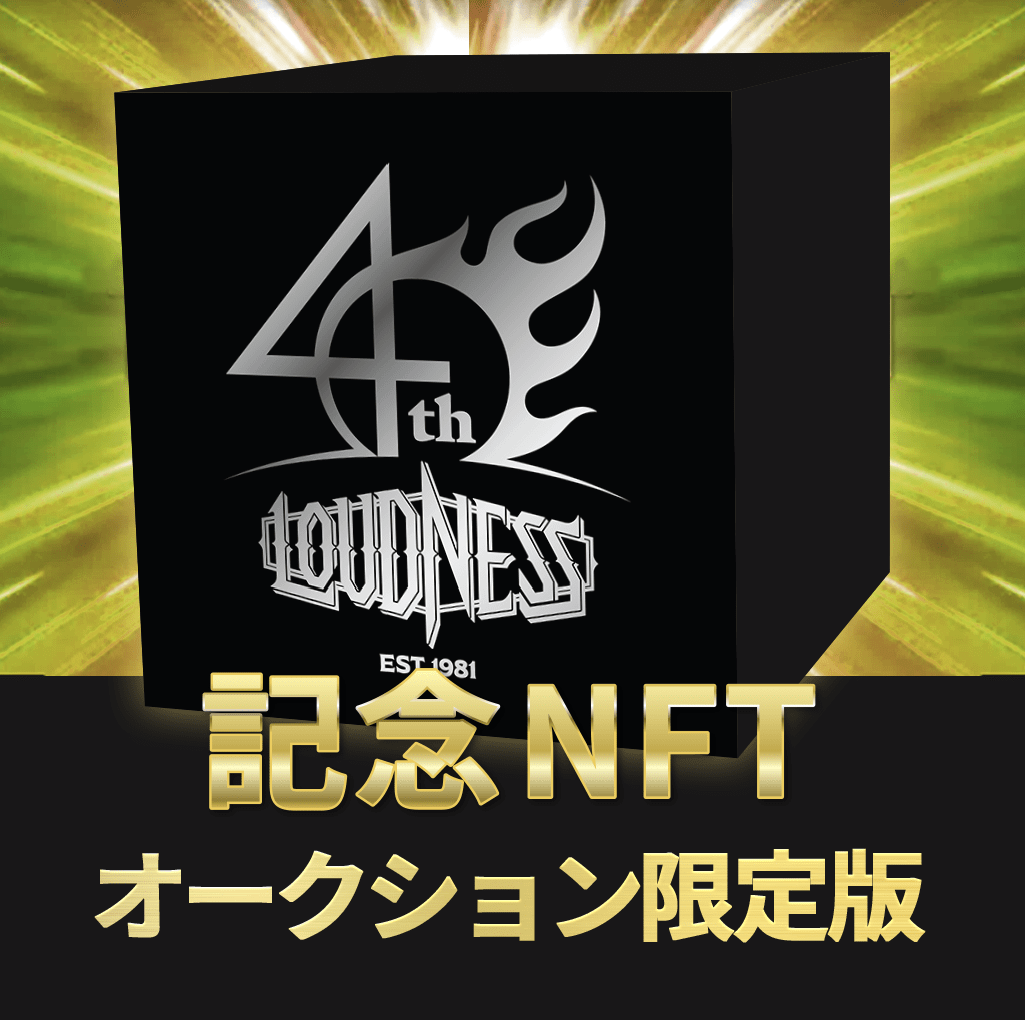 “LOUDNESS” 40th Anniversary NFT. One and only sold at auction in the world.
In addition to the new songs "YAMATODAMASHII" and "OEOEO" that were unveiled at the Tokyo live concert on August 5th, this is a full set of luxurious products like live photos. What a unique chance to come with all members' autographed "Sukajan", a satin embroidered jacket!

Serial Number 1 is given!

A song "YAMATODAMASHII" (Streaming)
A song "OEOEO" (Streaming)
Sukajan (autographed by all members)
Cap
Guitar Pins (10 types: 1 of them has not been released)
Live photos on August 5th (quantity : 15 items)
Jacket photo

In 1981, Munetaka Higuchi (ds), Akira Takasaki (g), Minoru Niihara (vocals), and Masayoshi Yamashita (b) formed "LOUDNESS". A number of legends are born from the release of the first album "The Birth Eve-THE BIRTHDAY EVE" that shakes the Japanese hard rock scene and showing an overwhelming live performance at the debut concert at Asakusa International Theater. become. After that, LOUDNESS, who had been active in Japan, toured the West Coast of the United States and Europe for the first time in July 1983, and the live caught the eyes of the people involved in Atlantic Records in the United States, and Japan. It will be the first worldwide multi-card contract for the band. The memorable worldwide release of the album "THUNDER IN THE EAST" recorded 74th place, which is unusual for a Japanese band on the chart of the American "Billboard magazine", for 19 consecutive weeks from the chart in. I kept charting in. And on the US tour with Motley Crue, he achieved the feat of standing on the stage of Madison Square Garden, the first Japanese band. The following album "LIGHTNING STRIKES" recorded 64th place in Billboard magazine, surpassing the previous work, and continues to be active both in Japan and abroad, but in December 1988, Niihara announced his withdrawal. From there, he repeated several member changes, including an American vocalist, but in 2000, he reunited with the original lineup and released the album "SPIRITUAL CANOE". The fans went crazy for the loudness that came back after a nationwide tour. As if to fill in the blank, he continues his angry release rush and energetic live activities, but after releasing ALBUM "METAL MAD", Munetaka Higuchi takes a rest for the treatment of hepatocellular carcinoma. After a harsh fight against illness for the next six months, Munetaka Higuchi died at the young age of 49 due to hepatocellular carcinoma at 10:44 am on November 30, the same year. After that, Suzuki "Anpan" Masayuki was welcomed as a successor drummer, and the band continued its activities without a break. In 2013, in order to concentrate on music activities with a more rock-solid system, he launched Katana Music, which will be his own management & label, and in 2014, released the album "THE SUN WILL RISE AGAIN" from Universal. Not only releases and domestic tours, but also various overseas festivals will call out. The results of traveling to European metal festivals every summer have been fruitful year by year, and in January 2018, the new album "RISE TO GLORY -8118-" was released worldwide for the first time in four years, and received the maximum evaluation in each country. At the timing of the tour, drummer Suzuki collapses due to a cerebral infarction. After that, the band hurriedly welcomed Ryuichi Nishida as a support drummer and decided to go on a domestic tour from spring, and in the summer, energetically ran around the world with a European tour including a large festival and a Korean festival appearance after a long time. rice field. And on the final day of "METAL WEEKEND" which was held for 4 days at Zepp Diver Cuty in September, Suzuki also appeared on the stage for the first time in 9 months, and although there was only one song, it was a lively appearance playing the drums and a complete return. He declared on stage that he would do his best even if it took a long time, and at the end of the year, "Rock Beats Cancer Vol.6" showed the fans the recovery behavior with the performance of 5 songs. In 2019, the band will continue to support Nishida as a support drummer, and will continue to work energetically with the Australian tour, which will be the first landing in May, the Japan tour, and the TUSKA FESTIVAL to be held in Finland in June, and Suzuki will return. We will continue to protect the places where we come, so I would like all the fans to keep an eye on us.

About Ranking Auction
A Ranking Auction is an auction in which the top bidders (in descending order of bid amount) can purchase multiple items for a predetermined period.
For example, in the case of a ranking auction with 10 items listed, the top 10 bidders will have the right to purchase them.

[Caution]
-The NFT Records provides services to customers in multiple countries, but the basic currency shall be one type for each auction (USD, JPY, etc.).
-If you bid in a currency other than the key currency, please bid at the rate calculated at the time of the auction. Please note that the amount may vary depending on the currency used.
・ The minimum bidding unit differs depending on each currency (USD: 1 $ unit, JPY: 100 yen unit)
・ For customers who are determined to be fraudulent, we may be invalidate the bid without notification.
-You cannot bid for less than the amount you have already bid (including the same amount).
-Even if the bid amount is less than the maximum bid amount of other customers, it is possible to bid if it is not the same price as other customers who have already bid.
(Ex.) If bid is already done for 1,000 yen for the 1st place and 800 yen for the 2nd place, you can bid for 900 yen. You cannot bid for 800 yen since it is already bid.
-If your bid rank changes, you shall be notified by the registration email.
-If the highest bidder is replaced 5 minutes before the end of the auction, the bid end time will be extended by 5 minutes.
・ It will take a certain period of time to confirm the final successful bidder.
-When the auction ends and the final successful bidder is confirmed, a notification email shall be sent to all successful bidders.
・ After the successful bid is confirmed, all non-Japanese customers shall be asked for payment by credit card.
-If you are a Japanese customer and the winning bid amount is less than 100,000 yen (tax included), we will make a one-time payment with a credit card.
-If you are a Japanese customer and the winning bid is 110,000 yen (tax included) or more, you will be required to pay a deposit of 110,000 yen with a credit card.
Once the deposit has been paid, please transfer the balance to our designated bank account within 7 days. Purchase is completed only after the transfer is completed.
-It may take some time to issue the A Trust certificate.
-Once the certificate is issued, the product will be displayed in your "My Collection".
-The account number displayed then will be assigned to each payment, so if you do not make the transfer within the specified period, the account will be invalid.